‘People can say what they like about us, but it’s our work that counts. That’s what’s important to us and we want people to see it at its best’. Ronald Pennell was talking about the importance of using decent photographs to spread the word about one of the current exhibition in the Rhuthin Craft centre that features the work of both Ronald and Betty Pennell  (Gardens· Myths ·Magic  : the work of Betty Pennell and Ronald Pennell,  7 December 2013 – 2 February 2014) http://www.ruthincraftcentre.org.uk/

But not even the highest quality image could properly convey the two shared lifetimes of talent, skill and imagination that are on display within this exhibition space. Both artists, who met whilst studying at London’s Royal School of Art in the 1950s under the tutorship of artists such as John Nash, combine formality and fantasy, myth and mystery in a range of works that includes etched glass, charcoal drawings, perspex engravings, oil paintings and bronze tablets.

Betty Pennell, who quietly admitted that she wasn’t too fond of attending exhibitions of her own work and would far rather be out in her garden, creates small worlds of magic through her drawings, engravings and paintings. Trees, shrubbery and gardens feature constantly in her work, in every medium, from the contorted velvety trunks in her charcoal drawings, to the formal engraved gardens of places such as Brondanw and Hergest Croft,  to the brooding woods in the background of the more colourful oil paintings. 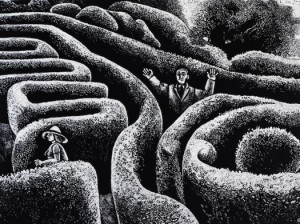 In each piece there seems to be a hidden story; gaps between formal hedges draw the eye towards garden recesses, distant spaces and, dark corners . Everywhere there are people wandering, searching , running.

Why? To where? Who are they?  There are no explanations, only imagination at play. 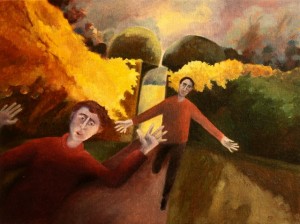 ‘I spent hours and hours wandering and playing in large gardens in Montgomeryshire as a child’ she explained. ‘ That combination of formality and the wild space beyond has been very influential in my work’. 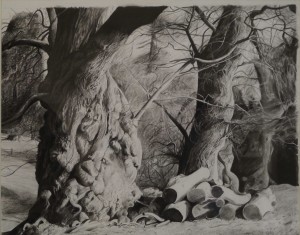 They have worked together to create the same feel in their acre of garden that stretches steeply, above the River Wye, and in which both have their own studios. A half acre bramble patch has been tamed into a series of six terraces, but the other half acre is woodland. ‘The garden is my real creation’ explained Ronald, who cast 40 slabs for the terrace steps which he then carefully hand coloured to blend perfectly with the natural sandstone of the Lower Wye valley.

The same attention to detail, the same perfectionism,  is evident in the images that he carves freehand onto glass bowls and pitchers. ‘I used to plan everything out in detail before starting but now I just press the glass against the etching wheel and – and let the story develop as I go along’. His glass carved stories have a bit of magical realism about them – they may by inspired by everyday events and people around him, such as the dog welcoming him home, or a friend who helped to tend the garden one summer, but he weaves an element of myth around them with a rich collection of symbols, motifs and strange beasts that also appear on his palm sized bronze tablets. 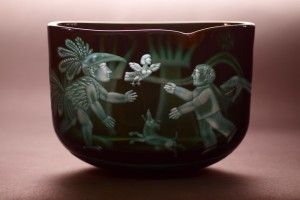 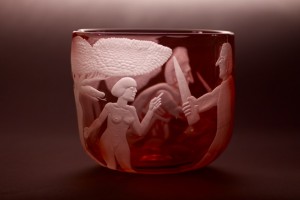 Both artists combine a wild streak of creativity with precise, highly disciplined craft techniques. And in doing so manage to draw people in to their own magical world of imagined landscapes. At the end of our conversation I was still dazed by Ronald’s explanation of his freestyle approach to glass etching – with no preparation, no practice runs – and asked him to explain the technique again.

‘Come down to the workshop some time to have a look at how it’s done’ he kindly offered.  And I think perhaps  I might just take him up on that.