In the lull between Christmas and New Year, and in a slice of blue sky between December storms, I headed off to an unfamiliar corner of Wales to track down a new tradition. The vast greenness of the Google earth images for the area south of the A55, between Llanrwst and Abergele, had suggested rather deceptively it would be an easy journey, but the road to Pen Isa farm was long, winding and more than a little nauseating. 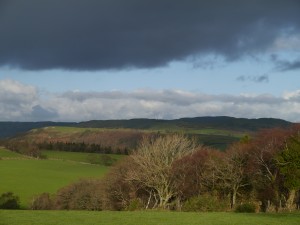 I arrived late and the farm was deserted. Only the huddle of 4×4 vehicles and the faint churring of chainsaws in the distance told me that I’d arrived at my destination – the annual Pandy Tudur hedgelaying competition, which had been advertised a few days previously on the national radio. It took another fifteen minutes to walk up a steep track, through a slurry of churned soil, to the competition site where a dozen or so hedgelayers had already been allocated their sections and had started to chomp, chaff, and carve away at the rows of willow, hazel, and thorn trees with their chainsaws and billhooks. 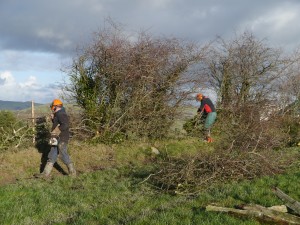 I found myself standing next to one of the organisers, who explained to me that this was the third year of the competition, which had been started in memory of Maldwyn, a local  man who had died of motor neurone disease.  The event was growing in popularity and had managed this year to attract a hedgelayer all the way from Pembrokeshire  who had made a 4am start to arrive on time for the start of the competition.  This year was also the first time they’d had a female competitor. Local farmers were now beginning to leave sections of hedgerows untrimmed on their farms to create a decent stock of competition hedges for years to come.

Onlookers and supporters paraded up and down both sides of the hedges, sizing up  the efforts of the individual competitors and gathering to chat and discuss in huddles of twos and three. People continued to arrive throughout the morning, appearing over a grassy horizon in chauffer-driven  ATV chariots. 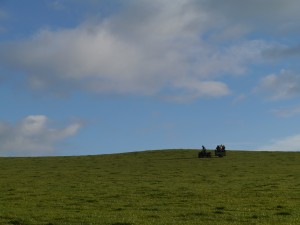 Some competitors had been lucky in the sections they’d been given – the relatively uniform size and spacing of the trees allowed them to cleave the trunks easily and cleanly at their bases and then fold the stems neatly into a woven hurdle between a row of short, newly placed posts. Others had been less fortunate and had to contend with gnarled, older trees that sprawled across the width of the hedge and called for more extreme hedgelaying skills – sawing high up in the canopy, hanging on thick trunks to drag them into line, gnawing away at misshapen growths with their chainsaw blades and carving crescents out of angled boughs to create pliable slivers of wood that could be bent more readily around and between the upright posts. 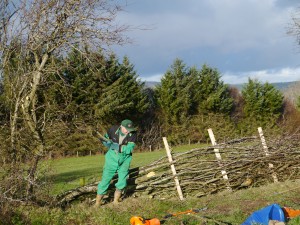 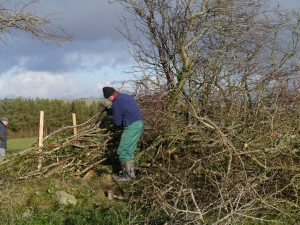 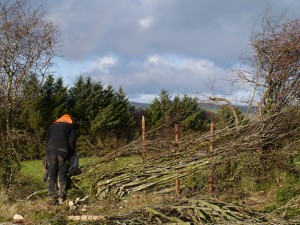 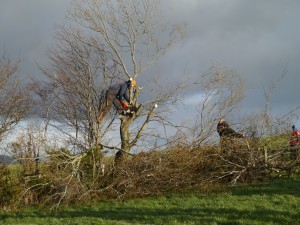 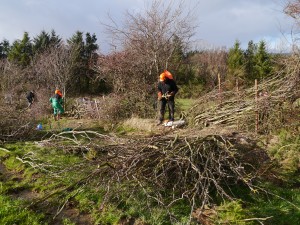 ‘The judging isn’t just about today’s efforts’  I was told.’ The judges have already visited sites where these hedgelayers worked last year to assess the quality of the first year’s re-growth.’ Consolation perhaps for some of this year’s competitors who’d been given such awkward sections that the end product was inevitably going to be long sections of bare, thick stems with all the growth at one end and the gaps filled in with cut branches that would die off over the coming months.

When lunch break was called and after the hedgelayers  had put down their tools, switched off their chainsaws and retreated to the two small marquees for soup, tea and cake, I walked down the lengths of hedgerow again, along the foamy mounds of discarded branches and twigs, for a last look without the constant whine and enveloping fumes of the saws. There were only two hours to go before the end of the competition. One or two of the competitors still had a struggle on their hands; for others the challenge was almost over and fifteen years’ worth of tamed growth now lay neatly and unprotestingly in narrow, stockproof barriers, along which the cut ends of stems glowed like gold ellipses. 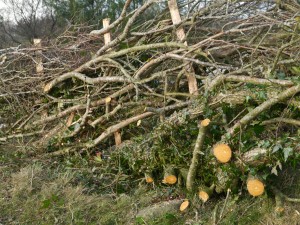