It’s the end of summer. The evenings are drawing in and the early mornings have that familiar autumnal chill and earthy smell.

A perfect time to scan back through photo files and remember the warm, colourful months that are beginning to fade to a distant haze.

The laburnum hedges in Cardiganshire were a real treat this year. Laburnum trees grow throughout the county, but are seen less frequently in other parts of Wales. They’re often mixed with other shrubby trees along earth hedgebanks but the pure labrunum hedges which can be seen in the area around Synod Inn, Plwmp, Blaenporth and Ffostrasol are stunning. 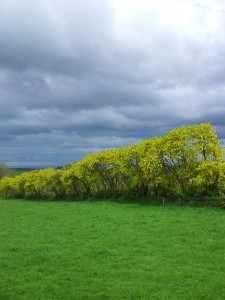 But their origin is a bit of a mystery. Why would farmers have planted trees that have such poisonous seeds back in the early-mid 19th C?

I’ve been researching but haven’t found a clear answer.

The laburnum tree originates in the mountains of mid and south Europe. It was introduced to Britain in 1597 and according to one web source it was grown by Gerard, the famous herbalist, in his garden. Although reputed to treat various ailments such as whooping cough, the poisonous alkaloid ‘Cytisine’ was discovered in the seeds in 1863.

At one time the wood was prized. The heartwood is dark and was used as a substitute for ebony and mahogany. The sapwood is a bright yellow and was popular at one time for turning decorative tool handles.

Laburnum trees can grow to a circumference of about 80-100cm. Farmers generally manage the hedgerows by coppicing, and up to 10 stems can grow back from a single stump.  If they’re not managed in this way the trees tend to die when they reach this maximum 1m circumference, according to Arthur Chater, one of Cardiganshire’s most prominent botanists. 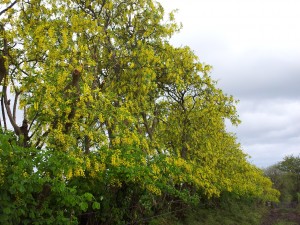 Laburnum trees grow easily from cuttings and this is how they’re usually propagated, according to Chater, although the author of farmlifeinwales.blogspot.co.uk maintains that the hedges we see today have grown from fence posts.

But back to the question – why plant trees with such poisonous seeds?

There are clues, perhaps, in the book ‘Agricultural Surveys pts 1-2 South Wales 1815’.

This is how the book describes the labunum, or ‘banadl Ffrainge’ (‘French broom’ in Welsh – the reference to France signifying its exotic, foreign origin);

“…..easily raised from seed, will succeed in various soils, even in the poor and hungry: though where there is a considerable depth, its progress is amazing.Its wood is by some preferred to mahogany, being close-grained and beautifully coloured. Hares will not browse any other tree, as long as any of the laburnum remains in a plantation; and though eat the ground every winter it will spring with additional vigour the succeeding summer. The produce of a few shillings worth of seed will furnish plants enough to protect half a million of other trees.”

So it sounds as if the laburnum was considered, back in the 19thC, as offering good value for money and may have held a particular appeal for Cardiganshire farmers with their (alleged!) reputation for holding tightly onto their purse strings.

But why were so many of them planted around Synod and Blaenporth? Who was the entrepreneur that first introduced them to the area, and perhaps influenced some of his neighbours to follow his lead?

One or two websites suggest that farmers have planted laburnum hedges for their sheer beauty, which is difficult to believe. They would surely have been more motivated by the prospect of increased profits – which would have been substantial enough to outweigh the risk of stock poisoning. 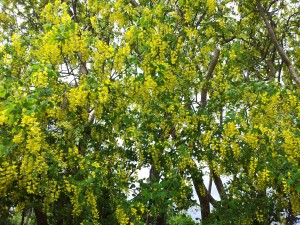 The bridewort, Spirea salicifolia, is another showy shrub that brings a touch of midsummer colour to Cardiganshire’s hedgerows. 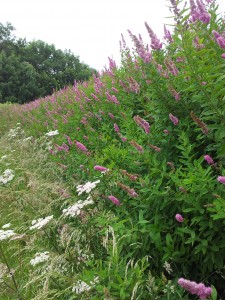 According to the Cardiganshire Antiquarian Society Vol 10, 1935, Flowering Plants and Ferns of Cardiganshire, the Spirea is a ‘denizen’ – a non-native plant that has long been established in Britain. In this volume it is described as being most commonly found in hedgerows close to houses but also to be found some distance away from settlements. The botanist Edwin Lees (a 19th printer from Worcester who gave up his profession to concentrate on  studying and promoting natural history) was surprised to see bridewort growing ‘midway between Aberystwyth and Cardigan, there being no garden or habitation near (Phytologist 1 1842). 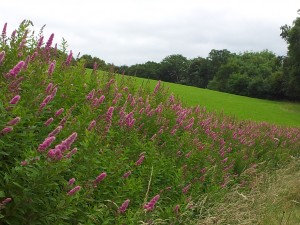 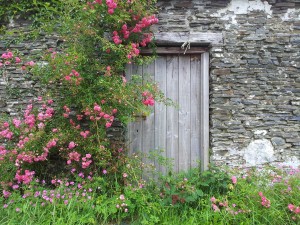 A hedge of bridewort on the Llanrhystud-Lampeter road, between an abandoned  stone cottage and the turn to Silian.

Bridewort hedges, which are quite plain for most of the year, but carry racemes of fluffy magenta-pink flowers in late June-July,  can still be seen in many parts of Cardiganshire, and are quite common now in most parts of Britain.

I wonder whether the specific name for bridewort, ‘salicifolia’ suggests that people may have chosen it to grow around their gardens because of some medicinal property – given that aspirin is derived from Salycilic acid in willow leaves? Or perhaps the popularity of bridewort was simply to do with its easy growing, suckering nature, the ease of maintaining the hedges and the attractiveness of the flowers in summer.

Whatever the reasons behind the appearance of laburnum and spirea in Cardiganshire, the splashes of yellow and pink along the county’s hedgerows are always a welcome, breathtaking sight on summer journeys through Wales. 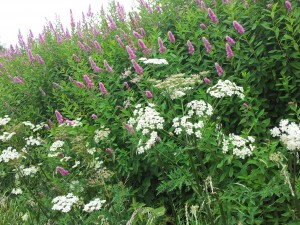