And so the curling finals are over at the Sochi Winter Olympics. It was mesmerising while it lasted; the smooth, low glide of the competitors as they released their stones into a slow waltz, the back-of- the-mouth grind of granite against ice, the frantic brushing and coaxing, and the satisfying shmack of stone against stone as they nudged each other for spaces that counted.

Curling stones aren’t exactly beautiful. They remind me somehow of bedpans. But there’s an attraction in their perfect smoothness and their smart shine – and they have a Welsh connection. Trefor Quarry, perched at the edge of the north Wales coast just west of Caernarfon, still churns out high quality curling stones although the place feels rather desolate these days. 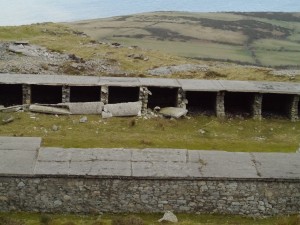 But during a rare few hours of sunshine last weekend it was a magical place to be. Light and shadows chased across slopes, fields and stone walls above Nant Gwrtheyrn, the abandoned quarrying village which is now a renowned Welsh Language learning centre and which is separated from Trefor by a massive buttress of granite cliff that rises steeply out of the sea. From Bwlch yr Eifl the Llŷn hills were waves of grey in the bright light. Eastwards, in the opposite direction, the land swept upwards from the blue water of Caernarfon Bay and around the village of Trefor in a mosaic of greens, russets, greys and browns. In the distance the highest mountains of Snowdonia were snow capped and gleaming. 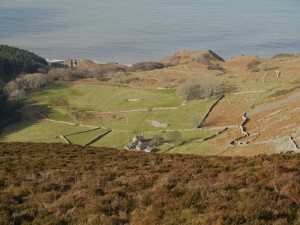 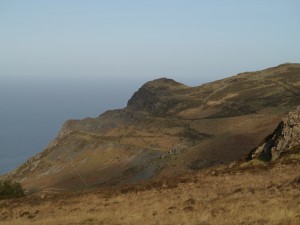 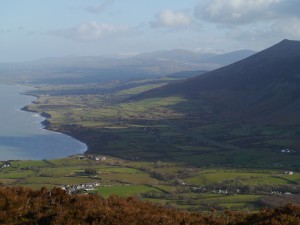 The place was virtually deserted. Our only companions as we began to descend through the quarry levels were a couple of croaking ravens, busily carrying bits of contorted heather stems back to their early nests. Our feet crunched on the sharp, glassy niblets of granite along the quarry roads, and small family groups of feral goats lazily watched us as we went by – barely exercised by our presence, and loath to expend too much energy in this harsh landscape of rock, heath and mossy grassland. 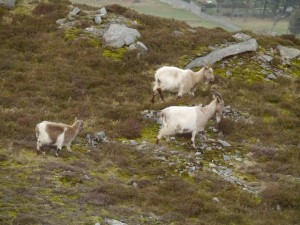 No one was working here today; one or two massive digging machines were resting, and looked tiny and toy-like against the huge cliffs of hewn stone. The old quarry buildings were eerie and we were glad to reach the bottom of the incline and turn onto the National Trust clifftop holding at Morfa. 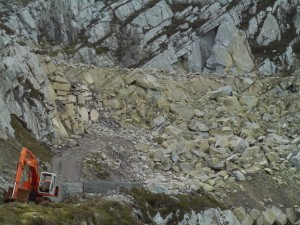 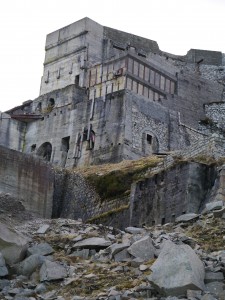 Choughs and piping oystercatchers kept us company as we trudged along the clifftop around Trwyn y Tal and the sight of the old harbour at Trefor, quietly nestling below Gyrn Goch and Gyrn Ddu as we turned back towards the land, was as calm and welcoming as ever. 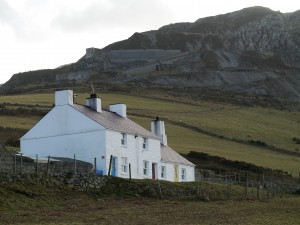 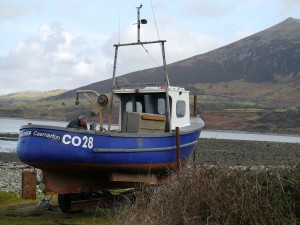