‘They’re still in flower’ he remarked confidently yesterday afternoon as he scanned the dark fists of rock on the northern slopes of Cader Idris.

This was the eighth time this year that Rhys Gwynn, the local National Park warden, had clambered these slopes in search of the purple saxifrage (Saxifraga oppostifolia) – one of Snowdonia’s most attractive arctic alpine flowers. By now he knew, pretty much, where every loose clump grew across these basalt rocks.However , having arranged, cancelled and rearranged this visit so many times there was a fair chance, on April 13th, that the show would be over for another year. 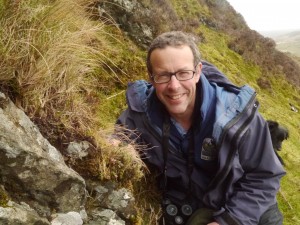 We climbed steeply from the shores of Llyn Gafr with its light shingly banks of rhyolite, upwards through the heather and along sheep tracks until we reached the base of the steep cliffs where the purple saxifrage has clung on since the last Ice Age, safely out of reach of ravenous grazers. As we drew closer the bright magenta flowers were easy to spot against the clumps of dark leaves and surrounding rocks. The name ‘Saxifrage’ means ‘rock breaker’ – a good description for a group of plants that grow from small pockets of soil in cracks and crevices and hug rock surfaces with their creeping stems or form cushions to protect themselves from searing winds. 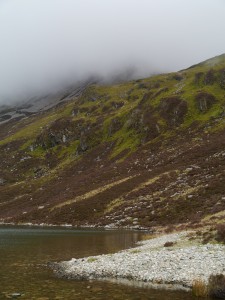 The purple saxifrage can flower as early as February in some parts of Snowdonia. It is said that this is the most northerly flowering plant in the world, with records from the north coast of Greenland. On Cader Idris yesterday a large number of flowers had started to turn a beautiful purply-blue shade as they withered. Another week and we might have been too late. 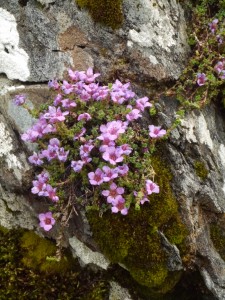 Under a hand lens the tiny lime pit at the end of each leaf could be seen clearly.

‘It’s called a hydrothode’ explained Rhys, ‘Calcium carbonate gets sweated out with moisture when the air is drier and warmer and this then crystallises so that the plant looks as if it has a touch of hoar frost over it. The crystals plug the hole so that the plants don’t dry out – and then dissolve again when the air is cooler and moister. The same happens with hundreds of tiny glands across the leaf surfaces so that the plants can sometimes look quite crusty. The long silvery leaves along the edges of the leaves also help to trap moist air around the plants. It’s all part of the plant’s survival mechanism’.

The small dark leaves grow in opposite pairs along the stems. ‘Only one pair grows each year’,  he added, ‘so it’s relatively easy to estiamte the age of the plants’. We spent some time counting the leaf pairs on the nearby cushions of saxifrage and realised that the plants were as old, and in places much older than both of us. In all directions from where we were sitting we could see  small holes leading deeply and darkly into the soft turf. These were wren holes, according to Rhys – their piping calls had kept us company all afternoon. The Latin name for these birds is Troglodytes troglodytes which means ‘cave dwellers’.Perfect. 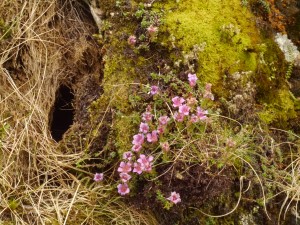 We headed down off the mountain and out of reach of the chilling breeze and fine rain. Travelling home that evening it seemed that spring had suddenly taken hold across the lowlands. Wood anemones had thrown sheets of white stars across forest floors and road verges and blackthorn flowers were beginning to break into white foam against the dark skeletal hedgerows. 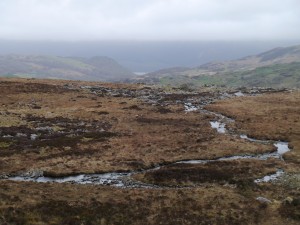 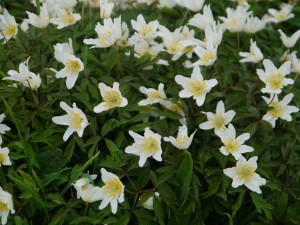 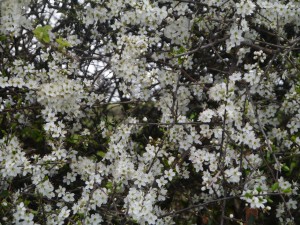