Firstly, it was famous for it’s wig-making industry back in the 18thC. These highly styled, rather pompous-looking periwigs were popular with professional and well-heeled men and were made of goat hair. According to some sources, it was in this town that the technique for bleaching the goat hair was devised. 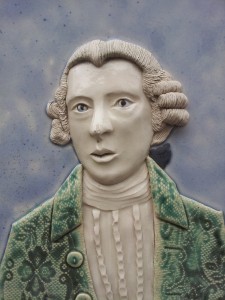 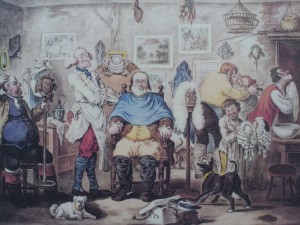 I learnt this from a ceramic panel on the house where  James Jones, one of the town’s hair bleachers, lived c.1741.  At the time I was searching for evidence that Abergavenny is now an ‘incredible edible’ town. I heard about this from a fellow traveller on the train to Cardiff.  The ‘incredible edible’ movement was started back in 2007 by a small group of people in Todmorden, in the North of England.

They reckoned that everyone understands food and so this simple idea of bringing people together to grow more food in spaces around their towns was born. In Todmorden they started with community allotments and herb gardens but by now have a fishery in the local secondary school and a market garden which is managed and run by young people. I don’t know how many other Welsh towns have adopted the idea but there are 50 incredible edible towns in the UK and the movement is now world-wide.

‘How would I know that Abergavenny is an incredible edible town?’ I asked the lady on the train. ‘I’ve only noticed the usual tubs and baskets of flashy summer annuals when I’ve visited’.

‘We’ve got a way to go’ she replied, ‘but have a look at the police station. They’re really keen there and it’ll give you an idea of what we’re trying to do’.

‘…and it’s worth visiting the orchard down by the river as well’ she added, as she rose from her seat at Cardiff Central station. ‘It’s a community one and it looks particularly good at the moment’.

And so I was hunting down the Abergavenny police station when I discovered the information about the town’s wig-making history. It didn’t take me long to find the town’s police HQ, with its impressive vegetable plot, neatly box-edged in the middle of a sloping lawn, where courgettes, corn, strawberries, tomatoes, onions and carrots were carefully spaced. 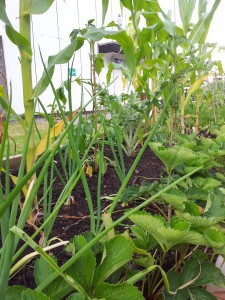 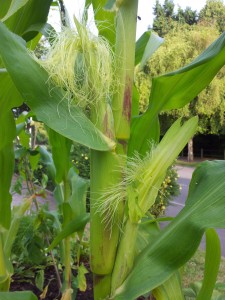 The duty officer, who was hovering rather suspiciously by the station door as I took a few photos, came over to chat. ‘It’s a great idea’ she said. ’We’ve had great fun this year, the vegetables have been amazing and we’ll definitely be carrying on – and hopefully we’ll see more businesses joining in’.

On the way back to the station I found the well-tended community orchard, at the far end of a quiet lane, between a  tiny industrial estate and the broad meadows along the Usk. I crossed over to the river,  where a wiry-looking gang were standing, concave with cold and just up to the hemlines of their shorts in the slow-flowing water, swigging lager and throwing their larky, loud conversation back towards a huddle of admirers on the riverbank.

I was excited by the incredible edible concept. Will it catch on in Wales? Can we hope to see the regiments of flouncy F1 hybrids, the trim lawns and abandoned, knotweed infested edges of public spaces replaced with tubs, boxes, beds, borders, school grounds and roundabouts full of plants that we can eat and pollinators can use. What would it take to make this happen, I wonder? 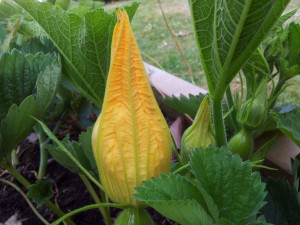