Kicking my heels in Cardiff last week I decided to escape the madness and musak of Queen Street at Christmas and headed off to the National Museum of Wales www.museumwales.ac.uk  for a couple of hours.  There are rich pickings in the museum’s galleries at the moment – an exhibition of Peter Blake’s tiny, wonderful and obsessive illustrations of Dylan Thomas’ ‘Under Milk Wood’ and another on the life of Alfred Russell Wallace. But the exhibition that enticed me first from the café and the frangipan mince pie, was the one exploring Land Art in Britain  between 1966 and 1979.

This is a touring exhibition from the Arts Council Collection, including works from some notable artists such as Susan Hiller, Antony Gormley, Richard Long, Tony Cragg  and David Nash. It attempts to illustrate how artists over the past 50 years have moved out of the confines of galleries to forge their art in the outdoor landscape. Charles Darwent gave the exhibtion glowing praise back in January http://www.independent.co.uk/arts-entertainment/art/reviews/charles-darwent-on-uncommon-ground-land-art-in-britain-it-may-not-be-big-but-it-is-clever-8612321.html but I struggled to understand how this rather tired looking collection told a story about the development of Land Art in Britain. The interpretation was a bit too sparse and the vast white exhibition space and silent roaming of the two keeper seemed to dull any sense of vibrancy and vitality in the pieces.It felt so different to the ‘Heaven and Earth’ exhibition of Richard Long’s work in the Tate Britain back in 2009 (http://www.tate.org.uk/whats-on/tate-britain/exhibition/richard-long-heaven-and-earthprogress) which had radiated so much energy and had left me longing to leave my job to pursue a similar passion.

If I lived close to Cardiff I could have gone along to a series of talks and discussions in recent months exploring the status of photography in land art.  I could have listened to the curators introducing the exhibition and explaining the history of the collection, and watched films by artists such as Ian Hamilton Finlay explaining how film has played a key role in the emergence of new forms of landscape art. But I don’t. How frustrating. Time perhaps for the National Museum to invest in  podcasting and other similar tools for its further flung visitors.

Two days later I was travelling down the western edge of Wales and was struck, as ever, by David Nash’s perfect grid formation of white stemmed Himalayan birches in the south Snowdonia landscape. The bark gleamed in neat parallel stripes against the greyish haze of adjacent woodland. The site is known, yet not known  – but seeing it from a distance, year after year, is enough to create an endless fascination with the artist’s work, and the way in which he uses, forms and places natural objects to create a sense of order and aesthetic against a backdrop of infinately ordered chaos that is our natural environment. Somewhere in that same space is the pleached, lattice-branched circle of ash trees, illustrated as a framed set of faded pencil sketches in the Cardiff exhibition. I often wonder how it looks now,  30 years after its planting. 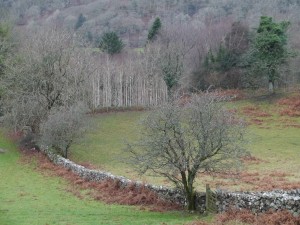