It’s Christmas Eve morning and the raging gales and lashing rain are finally calming down. But the cushions of ivy on the old sycamore stumps outside the window are gleaming bright lime against a dark bruise of a sky and the wind is still sending occasional echoey howls down the chimneys. Yesterday was treacherous with  gusts of 87mph recorded in Snowdonia, severe ‘risk to life’ flood  warnings in south-west England, cancelled  journeys on ferries and trains and two recorded deaths.

This was the second bad weather strike of the month. Last weekend I went to Rhyl to look at the damage caused by the tidal surge on December 6th.  2013. The storm had been expected – there were 230 flood alerts across England and Wales, 41 severe ‘risk to life’ flood warnings. Weathermen predicted it would be as bad as the North Sea Flood of 1953 when the sea was 5m above normal high tide levels and which caused 307 deaths and left 40,000 homeless. The same critical concoction of conditions were present on December 6th 2013 – deep areas of very low pressure moving across northern Britain towards the Netherlands with the rising air causing the surface of the sea to bulge, and also high tides and strong winds that pushed the bulging sea landward onto the north-west coasts of Scotland and Wales and down the east coast of Britain.

The tides of December 6th 2013 were the highest seen in 20 years in Wales. Windspeeds of up to 140mph were recorded and hundreds had to evacuate their homes across the North Wales coastline. Rhyl was the focus of the press’ attention at the time but it was deceptively peaceful last weekend. There were no obvious piles of abandoned furniture nor lumpy barricades of greying sandbags on the west side of town, where caravan sites, supermarkets and bungalows lie dangerously low in a landscape that is crying out for a bold and massive scheme to reclaim and redesign for nature. The huge and growing array of turbines glinted silently on the horizon and people were quietly walking their dogs on the beach. The locals had their stories of blinding sandstorms and house sized waves but none of them could point me towards the scenes of terrifying devastation reported on the news. 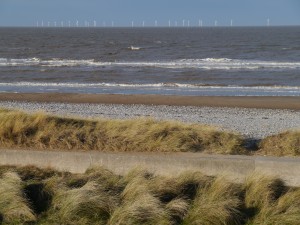 I thought I’d take a spin through town before heading home. The run of temporary barriers and huddle of onlookers  at the eastern end of Rhyl’s rather sad-looking sea front suggested it was worth stopping to have a look.  The storm had taken a good bite out of the promenade and had spat out huge chunks of concrete and massive shards of tarmac. Memorial benches hung precariously above small cliffs of sand and decorative banks of lawn and shrubbery were spewing their contents onto the prom having lost the protective armoury of their retaining walls. Below the sea wall the silty waves were still seething as they swashed onto the concrete steps that had failed to subdue the early December tides. 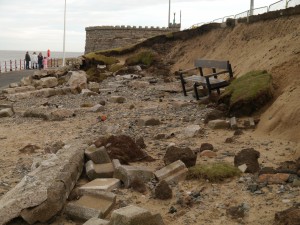 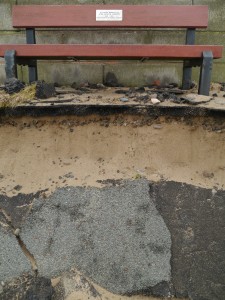 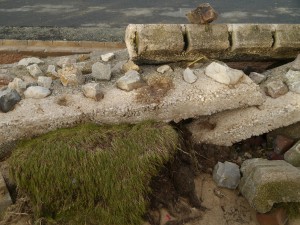