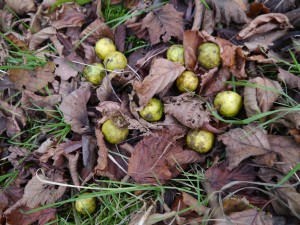 Clearing the car this morning I found a handful of crabapples that I’d picked up from the ground in Poor Man’s Wood, Llandovery, a few weeks ago and left in my coat pocket. The tiny yellow globes were wizened but I thought I’d try and make some use of them.

Crabapples are hard and sour but make a good pectin rich base for jellies and jams, but are generally best mixed with other hedgerow fruits, such as blackberries and elderberries. Richard Mabey, in his beautifully reprinted ‘ Food for Free’ book (2012 edition) shares a few interesting ideas for using crabapples – such as pickling in spiced vinegar and adding to roasting pork, or mashing the fruit into an apple cheese (puree) with brown sugar, cinnamon, ginger, nutmeg and cloves. This last recipe sounded delicious but required 2lb of fruit. Even if I had that amount of crabappples I doubt that I’d have the patience to core and chop the tiny fruit.

I thought, however, that my own little handful of fruit from Carmarthenshire might add a bit of taste to a saucepan of mulled wine. Not such an original idea, as I later found out from reading the references to crabapples in Richard Mabey’s other opus magnus ‘Flora Britannica’ . Anyway, the fruit was chopped early this morning, the rain still lashing at the dark kitchen windows and have been soaking for 10 hours in a saucer of Cointreau. I’ve just thrown the whole lot into the mulled wine and tested the result. Just perfect. The little pieces of crabapple bob on the surface and are tiny pockets of tasty orange sharpness.

It’s strange to think that these little yellow bobbles of sharp fruit, born on rather spindly, ugly and spiny trees, are the ancestors of the cultivated apple Malus domestica, from which more than 6,000 varieties have been bred over the centuries – although only about a third of these now survive.In the current issue of Natur Cymru (http://www.naturcymru.org.uk/) Steve Oram, from the the People’s Trust for Endangered Species (PTES), reports on the progress made in mapping orchards across Britain and Ireland. A grand total of 7,363 orchards have been identified in Wales to date; the hotspots in terms of number of sites are Powys, Monmouthshire, Flintshire and Carmarthenshire. Interestingly, Ceredigion fared better than I thought, with 374 sites and a combined hectarage of 6.23 hectares – 4th after Powys,  Monmouthshire and Carmarthesnhire. The next phase of this work for PTES is to ensure no fewer than 6 sites exist for all known varieties of apple.