It was late afternoon by the time we arrived at the entrance to Poor Man’s Wood, on the outskirts of Llandovery. It had been a bleary autumn day that hadn’t quite woken up and it was rapidly retreating into a drizzly twilight by the time we pulled up.

The woods were donated to the town in the 16th by a Vicar Pritchard, on condition that the Council and residents of Llandovery could enter the property, on foot only, for the purpose of taking dead wood for fuel – but no more than they could carry out on their backs. Later on in the 19th C some lead mining also took place in the woodland. 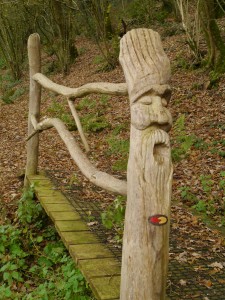 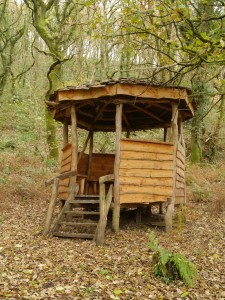 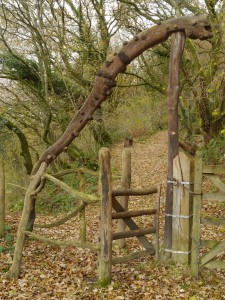 There were no fuel gatherers in Poor Man’s Wood the day we visited. A lone buzzard circled above the oaks as we plodded through a deep, damp carpet of leaves, studded with golden green crabapples. In a few months’ time we’d be here to see the wood anemones and bluebells , and to watch blackcaps and pied flycatchers . But today the big draw was the work undertaken by the Tir Coed project which has been working with about a dozen volunteers to create structures from timber harvested on the site. The volunteers and their newly acquired skills have since moved on, but their work lives on in the woven hurdles, the magnificent kissing gate entrance, the quirky bird hide and the carved characters along the footpaths.